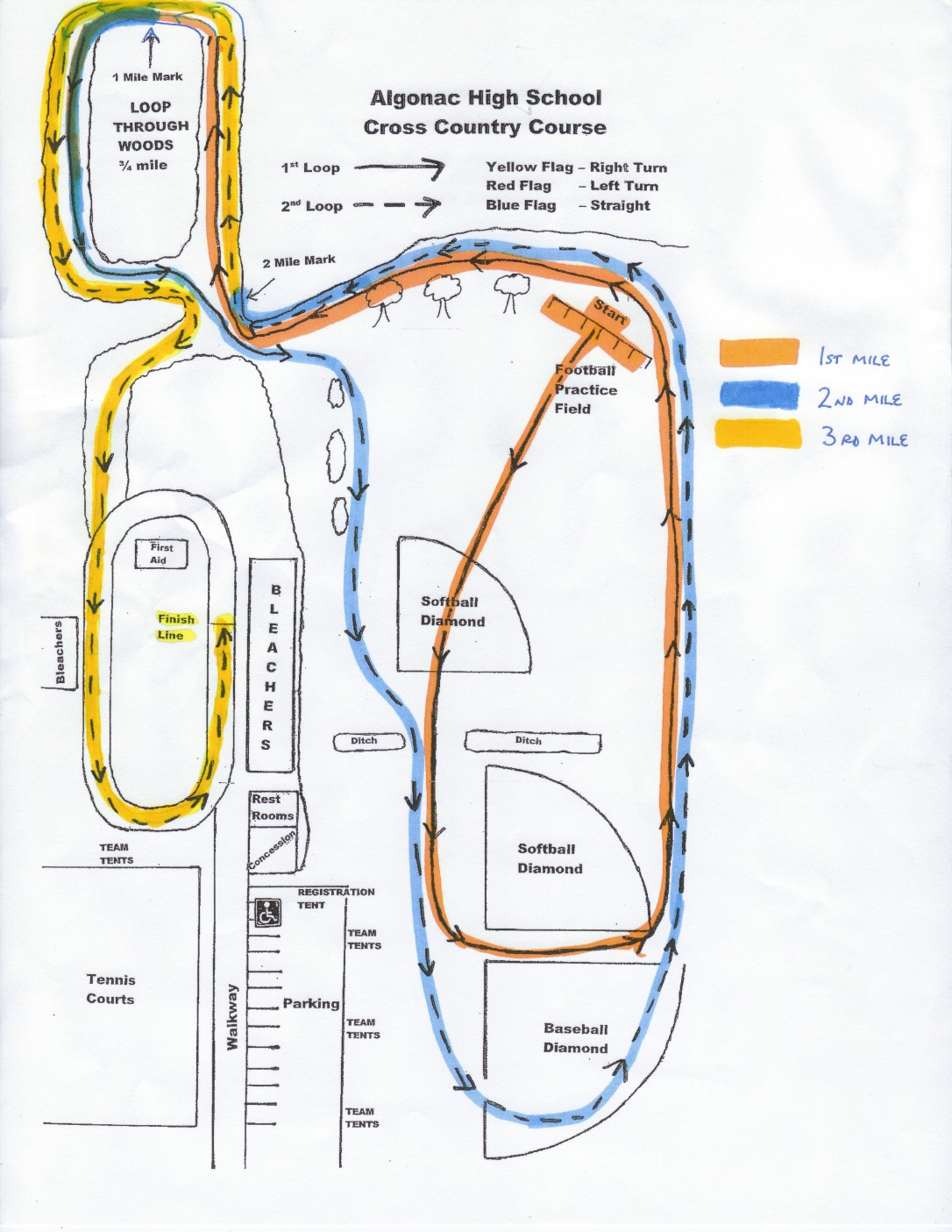 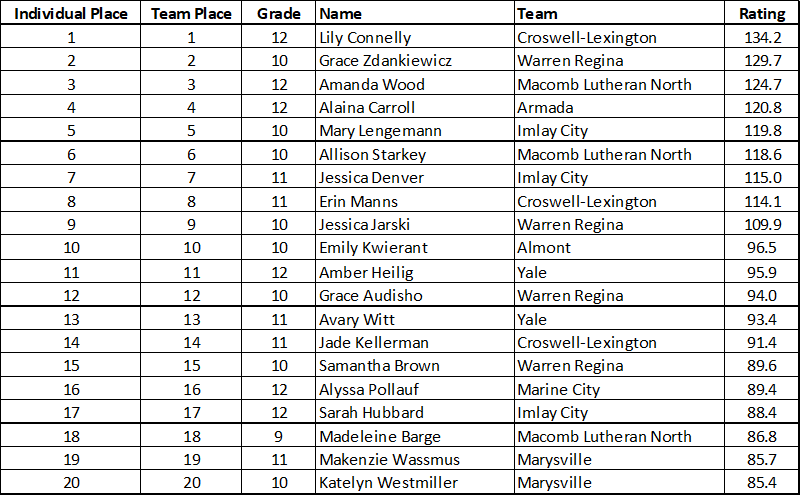 Very young team that benefitted from the addition of 5 freshmen last year.  Regional champ last year in an extremely tight team race.  Ended up 5th in Macomb County as well, ahead of much larger schools.

Grace was able to set a PR early in what would be a great freshman season.  18:55 at Muskrat Classic, always a fast course.  She slowed down a little in the middle of the season, but rebounded to finish 3rd at regionals.

Sabrina came up with a huge regional race last year, running 22:25, a 12 second PR at the time.

Tough call between Grace and Jessica Jarski, both equally deserving of mention.  Grace posted a faster 3200m time (12:32).  That time came after a period of steady improvement and was good enough for 8th at Macomb County.

Imlay City was a tough 4th here last year.  Their depth, especially in spots 4-7, really help them here.  Personally, I feel the numbers may have them underrated.  Their track season also really improved their projections, many girls broke 6 in the 1600m.  Always beneficial to have a senior-laden team in the biggest race of the year.

Came on strong as the season went on, running her fastest times late.  Her PR of 19:50 comes from regionals, where she finished 8th.  Thumb Area also went well, a 4th place finish.  Improvement continued into track, where she popped a 5:23.

Lutheran North’s 5th-7th girls can be the deciding factor here.  Wood and Starkey are known quantities and they have a few freshmen who can be decent additions.  They were 7th here last year, so potentially a minor upset.

Amanda spent much time in the upper places of her races.  2nd at Regionals, Macomb County, Catholic League, and Hansons, then 1st at Autumn Classic.  She’s been in the 19’s all three years.  This spring, she showed some speed, running 2:19 in the 800.

Maya is one of those aforementioned 5th-7th girls that could be integral to Lutheran North’s success.  Such a gradual progression last year, running 27+ minutes their time trial, into the 22’s by the end of September, finally running a 22:14 (PR) here.

This is where it’s truly a guessing game on my part.  Brief research shows that most runners from Rochester St. John go to Lutheran North, if she does, this is another factor that puts them ahead of Cros-Lex.  Three results, two in the 13’s, a 12:50 at Holly.  If she goes to Lutheran Northwest, then that’s a big help for them.  If she goes public, the same thing.

Erin improved on a solid freshman track season, dropping from 5:51 to 5:41, then showed the ability to handle longer distances, running 12:15.

I wouldn’t normally mention two girls from one school, but Lily’s track season deserves recognition.  8th in the 800 at States in a 2 second personal best! 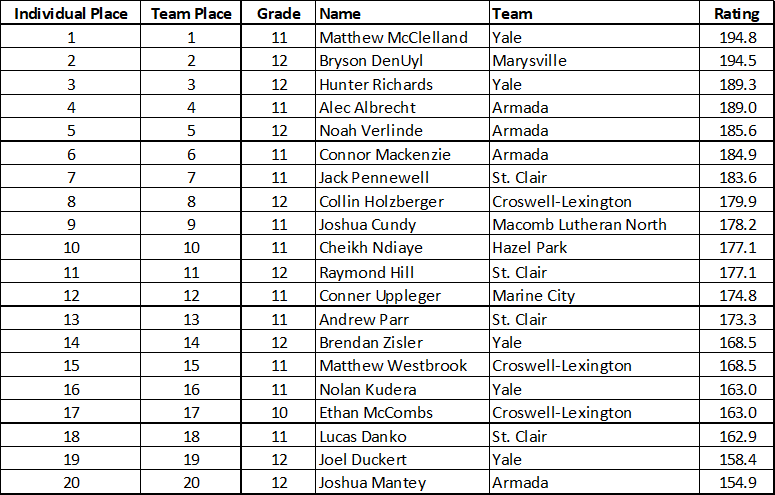 Yale is about as experienced a team you’ll find.  They’re the defending champs here, were 2nd in Thumb Area, and finished 20th at States last year.  They’re led by an outstanding top 2, but will need some depth to step up in order to move up at States this year.  They’re set up for success in the future, check out the numbers of their middle school team.  Oh, forgot to mention their 4×8 was 3rd and 4×4 1st just a few weeks ago.

Hunter can be right there with McClelland.  The accomplishments are there as well, 2nd at Thumb Area, 4th here last year, just a subpar State race lowers his projection.  But the great times can happen, as his 4:34 in track indicates.

When your brother runs 48.x and you run a 2:00 800 as a sophomore, you’ve got my eye for potential.  Is the pure, unadulterated speed there?  Maybe not, but the 2 flat shows some strength.

St. Clair is another team that’s experienced, but not as much as Yale.  3 of their top 7 last year were freshman, and as you know, that can lead to major jumps.

Jack suffered a stress fracture at the end of 2018’s track season, hindering his summer training and his XC season.  Rebounded quite nicely in track, running 4:26/9:45.  As I told St. Clair’s coach, he’s probably underrated by the numbers, but has the potential to flirt with the 16-min. barrier.

As what may be St. Clair’s only senior in the top 7, I’m placing him here.  He was 16th here last year, but thankfully was able to run at MIS.  From his freshman to junior year, he’s run more than 2 minutes faster.

Out of all the underclassmen, he’s likely the most capable of surprising this fall.  He’s had a few breakout races but not great consistency.  17:42 at Muskrat Classic and 17:22 at MAC Championship.  In track, his 10:38 (multiple sub-10:50 efforts too) shows he can be a steady figure in the 17’s this year.

Armada is carried by a very quick top three, beyond that remains to be seen.  They return 4 of their top 7 from a team that finished 2nd here last year and 17th at States.

Alec could be placed in the darkhorse category as well.  In just his first season of XC, he was able to run mid-16’s, finish 6th here, and sneak into the top-50 at States.

A certain Armada alum who’s running at Oklahoma next year has said Verlinde is putting in some serious training this summer.  Coming off a track season where he broke 10 indoors, that could mean time in the low 16’s or maybe high 15’s.

Connor dropped 6 seconds from his already excellent freshman 800 time (2:06 to 2:00).  As with Albrecht, last year was his first running XC.  His rating is lower because of some slower times to start the year, he’s another one that you could see in the low 16’s.

Keeping in line with my fascination with XC stars doing field events, Collin finished 8th at States in the pole vault.  Must be nice to have that combination of fast twitch fibers, strength, and ability to run sub-17.

Cheikh shows a few track results from Berkley.  Not often you see Hazel Park distance runners.  I remember they had a state champ back in the 90’s.  I’m hoping he runs for Hazel Park.

I think I might make it out to this region to see the battle between Bryson and McClelland.  Bryson had the better of it in cross, being the defending champ here and notching that spot on the stage at MIS. 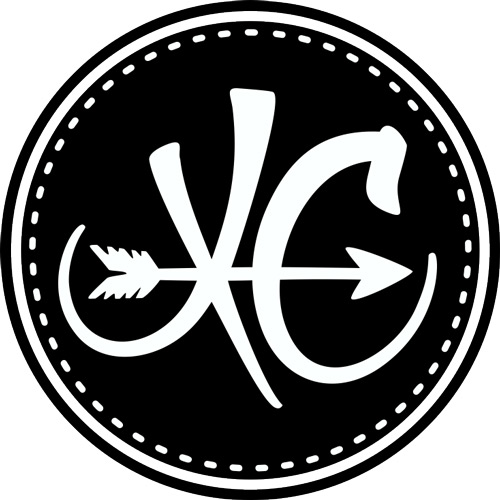